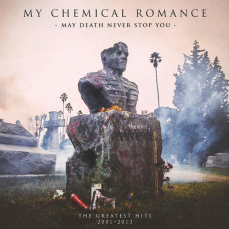 May Death Never Stop You is a greatest hits compilation album by the American rock band My Chemical Romance, spanning the band's entire career.

On March 22, 2013, the band announced their break-up on their official website, issuing this statement:

"Being in this band for the past 12 years has been a true blessing. We've gotten to go places we never knew we would. We've been able to see and experience things we never imagined possible. We've shared the stage with people we admire, people we look up to, and best of all, our friends. And now, like all great things, it has come time for it to end. Thanks for all of your support, and for being part of the adventure."

May Death Never Stop You was released on March 25, 2014. Pre-orders became available through My Chemical Romance's official website on January 21, 2014.[6] The unreleased track "Fake Your Death" was premiered on BBC Radio One on February 17, 2014 and was then available digitally via iTunes straight after.

Rate this item
(0 votes)
Last modified on Monday, 14 April 2014 22:47
Tweet
More in this category: « Cavalier Youth By You Me At Six Everything Will Be Alright In The End - Weezer »