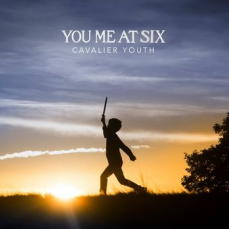 Cavalier Youth is the fourth full length record from English alternative rock band You Me at Six. The album was released on 26 January 2014 through Virgin Records in the UK, Australia and New Zealand.[12] The first and lead single, "Lived a Lie" was released on 2 September 2013, The track also featured in the football video game FIFA 14.

This was followed up by the second single "Fresh Start Fever" which was released with a music video on 3 December 2013. The album debuted on the UK album chart at number 1 & received a very mixed reaction from critics.

In June 2013, the band announced they will be entering a recording studio at a secret location to record their new upcoming album. On 20 June 2013, vocalist Josh Franceschi announced all lyrics have been written and the band is ready to record the new record. Pre-production subsequently began on 21 June 2013.

In July and August 2013, the band announced they will be recording their album in Los Angeles, California with producer Neal Avron (Fall Out Boy, Linkin Park, Yellowcard). The band also worked closely with music photographer by the alias of GetDeluxe, who filmed the tour diary of the band's Spring Fever Tour with All Time Low and Pierce The Veil. Band members also updated their official Instagram profiles with the progress of the new album.

Rate this item
(1 Vote)
Last modified on Monday, 14 April 2014 22:25
Tweet
More in this category: « Going To Hell By The Pretty Reckless May Death Never Stop You By My Chemical Romance »