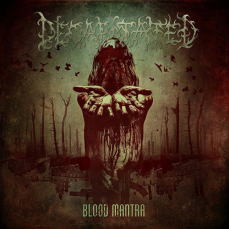 Blood Mantra is the sixth studio album by Polish death metal band Decapitated. It was released on September 22, 2014 in Poland via Mystic Production and later in September via Nuclear Blast Records in other regions. Blood Mantra was produced by Wojtek and Sławek Wiesławscy.

It is the band's first album to feature bassist Paweł Pasek and drummer Michał Łysejko. The song "The Blasphemous Psalm to the Dummy God Creation" was released as a single on September 8, 2014.

Blood Mantra is the follow-up to Decapitated's 2011 album Carnival Is Forever. It is the recording debut of drummer Michał Łysejko with the band, who joined the band in January 2014, and also the first album to feature bassist Paweł Pasek. It was recorded at Hertz Studio in Bialystok, Poland, with producers Wojtek and Sławek Wiesławscy. The album cover art was created by Polish artist Łukasz Jaszak.

Guitarist Wacław "Vogg" Kiełtyka commented on the album, "Extreme and groove — I think that's the best way to describe our new album. This time we feel that we have something totally crushing and huge. Blood Mantra is the most heavy and mature album we ever did in our career. I cannot wait to start to play songs live because riffs are soo deep and powerful." He also stated, "We flirt with various tempos mixing death metal with grindcore and almost outright black metal atmosphere together with more, so to speak, 'crowd-puller' beats verging on groovy, almost stoner-rock climates.

There are also a few more modern metal rhythmic riffs where we return to the climate of Organic Hallucinosis album. I'm certain that the very fact we are again, after 9 years, in Hertz studio will evoke the spirit of that album. The vocals sound very promising. Rasta [Rafał Piotrowski] is a much more experienced vocalist compared to the Carnival Is Forever album times. And his voice sounds more powerful and deeper."[